How to not get stuck, not get lost, not get bogged… are you ready for the Canadian Wilderness? Perfect! That means it’s time to plan your Adventure Canada to be safe.

Travellers often ask about tips and advice for driving in the backcountry Canada.
Most people travel Canada on major highways, like the Trans-Canada which connects East and West. The Trans-Canada is the longest national highway in the world.

Over 8,000 km in length, the highway spans the entire length of Canada. No wonder it passes through many amazing places on the way, Banff National park in Alberta, Moose Jaw in Saskatchewan,  the splendid Fraser Valley in British Columbia, only to mention some.

Everything you need to know about this kind of drives is covered on the page Canada Trip on paved roads.

But, not all of the Canadian backcountry roads are paved. In fact, we have long stretches of gravel roads, which are also known as dirt roads, or highways. A 4WD vehicle is needed to drive some of our highways.

What’s the fuss about driving on gravel?

Some travellers are more adventurous than others and some have lots of time available to explore the country. Many would like to get off the beaten track for an adventure in Canada. Most of us like to get away from the tourists, don’t we, eh? That’s where the adventure Canada begins.

Since you are planning a travel route through the Canadian backcountry, the chance is that you want to drive gravel roads at some stage during your trip. That’s when you will get a taste for an adventure Canada pure!

This sounds like fun! However, keep in mind that you may encounter some extreme driving conditions along the way. Also, be adviced that most car rental companies don’t allow their rental cars on gravel roads.

Many of the unsealed Canadian backcountry roads are well-maintained gravel roads. This is particularly true for roads leading to tourist attractions or roads to somebody’s country home.

Check out the condition of the road you plan to travel!

If you are told that 4WD is required, don’t go in your 2WD Dodge towing a trailer. You may not need it, but I always like to have lots of clearance on my car. This is not needed for normal gravel roads, but on many roads I drive, I have to deal with rocks, sometimes quite large once.

I drove a 4WD Dodge Durango a few years ago when a rock smashed the air-conditioning line while driving on gravel.

Out west, I have always lived on gravel roads. Summer is never a problem, but winter can be tough after a heavy snowfall. It can take days before the maintenance crew turns up to plough the road.

To be stuck in the backcountry for a few days during winter, sometimes with no power, is not unusual where I live.

I have always had a 4WD and that’s the only type of car I want to drive out where I live. Most of us have two sets of tires. We change to the summer tires, or all season tires once the snow goes, which is usually in April in the Okanagan, British Columbia. My winter tires are studded and that’s the only way I can live out here. 4WD alone is not good enough living in the mountains unless you want to use chains.

I assume that you are planning your Canada adventure not during the winter season.

What about if the road is not well-travelled to a tourist attraction you want to see?

We have a large network of forestry roads in Canada, perfect for an adventure Canada experience. Many of the gravel roads are old logging roads which lead to remote lakes and cut-lots with amazing views.

These roads are mostly used by locals for recreation, and you usually don’t find information about them in a tourist brochure. Not many tourists venture to these places, they are kind of insiders tips.

Those roads are not maintained in winter unless active logging is going on. When you drive these roads early in the season, you are advised to have a chainsaw, or good handsaw with you, in case there is a tree blocking the road.

To start with, make sure you have proper directions and a detailed and current map of the area.

If you don’t have experience with driving a 4WD and renting a car, make sure you know how to engage the four-wheel drive.

Try not to do a trip like this alone. The best way to avoid trouble is to find someone with another vehicle to accompany you on your drive into the backcountry.

If you head out alone, let somebody know what you are up to! Tell someone where you are heading and when you intend to be back/arrive at your destination. When you do arrive, don’t forget to check back in.

During your Adventure Canada, driving in the backcountry gives distances a different meaning. If your trip takes you to the backcountry, it is best to assume an average travel speed of not more than 50 km/hr on gravel roads. On a good stretch of road you will most likely go faster, but on a bad road, it will be a lot less than that. In any case, reduce your speed and watch out for potholes.

If you are worried about the road quality, slow down! Think about your shocks absorbents, too. Spares are hard to come by in the middle of nowhere.

Another hazard if you speed is the danger coming from sharp-edged rocks on the road. The faster you drive, the bigger your chance to have one of your tires split open.

Keep your hands on the wheel at all times and avoid heavy braking and accelerating.

Canada trip on paved roads, tells you about cattle and other animals on the road. To expect wildlife on the road is even more important once you leave the highways. Wildlife is plentiful in the backcountry.

Dusk and dawn are the most dangerous times for driving. If you see a deer, bear, moose, any animal, slow down! Especially the deer; even if they don’t seem to be heading your direction, they have a habit of turning around the last second to run straight under your wheels. And if you see one or two, there are likely to be more.

In areas with a large moose population, beware! Every year drivers get killed because of Moose running into their vehicle.

Canada has some pretty large cattle ranches, mainly in British Columbia and Alberta. The fact, that some public roads lead through ranch country also means that once you turn off the main road you are on private land and are actually trespassing.

Find out beforehand if you are allowed to drive to a certain viewpoint located on a sidetrack.

If in doubt, get permission!  Most large property owners in Canada don’t like trespassers. People like to know who is on their land, just like you would want to know who is poking around your backyard.

Most Canadian Ranches have large grazing leases on Crown land. They move the cattle up to the leased land late spring and the cattle are free to roam until late fall when there is no grass left.

On Crown land, as well as lease land, you are allowed to drive and camp, even if some ranchers try to make you believe, that you are not.

One more thing about driving in the backcountry: you will come across gates. Gates are there for a reason! If they are open, leave them open. If you find them closed, make sure you close them again behind you!

Many backcountry roads are impassable many months of the year, depending on the province you’re in. July until the middle of September is probably safest time for your adventure Canada in regards to the weather.

At any time of year, the weather can change suddenly. A downpour can make the road you’re on into a mudslide. That’s when you need 4WD!

If you come across deep puddles and you are not sure, get out and check on the situation.

For some backcountry roads, a 4WD is recommended but you will be okay with an ordinary car if the conditions are good. Other roads are for 4WD only. There is always a good reason for it. You may encounter deep water on the road, or rocks and boulders that require high clearance, washouts that normal cars can’t climb through or steep banks.

The following advice for driving on backcountry roads in Canada is for the average traveller, not the extreme 4 x 4 enthusiast. For more detailed recovery methods you have to consult other websites.

It can happen to any of us. Don’t panic, stay calm! Often it is not as bad is it looks.

Basic equipment to have on board when going on longer backcountry drives:

Don’t spin the wheels and get yourself deeper into it! If you’re stuck, try reversing before you try to move forward again. If that doesn’t work, use some stones, logs or gravel (and your shovel), branches, grass to try and create a path. You might have to use the jack on a plate to lift the car and put some material under the wheels. Use the carpet out of your car to get some grip, if that is the only option! You might have to do this a few times to get back onto firm ground. Don’t despair, keep on trying, it will work.

If you have a winch, use it.

You might just be lucky and someone will come along!

And in the end, it will be just another experience to be stuck in your memory, when you think back to your adventure in Canada!

Some prefer it fancy, I like it simple. I used to tent on the way. Now I sleep in my Toyota RAV4 which I converted into a mini-camper. What an immense improvement in camping quality. I will never go back to tenting unless it’s during a multi-day hiking trip. On my recent road trip to the Canadian north, Northwest Territories […]

Camping at the Old Ghost Town of Quesnel Forks BC

Old Ghost towns always intrigued me. Quesnel Forks is one of the earliest boom towns in the Cariboo, British Columbia with many restored buildings, information kiosks and free riverside campsites. Likely BC is the starting point for visiting Quesnel Forks. A 13 km drive along a winding gravel road with a couple of steep switchbacks will take you to the […] 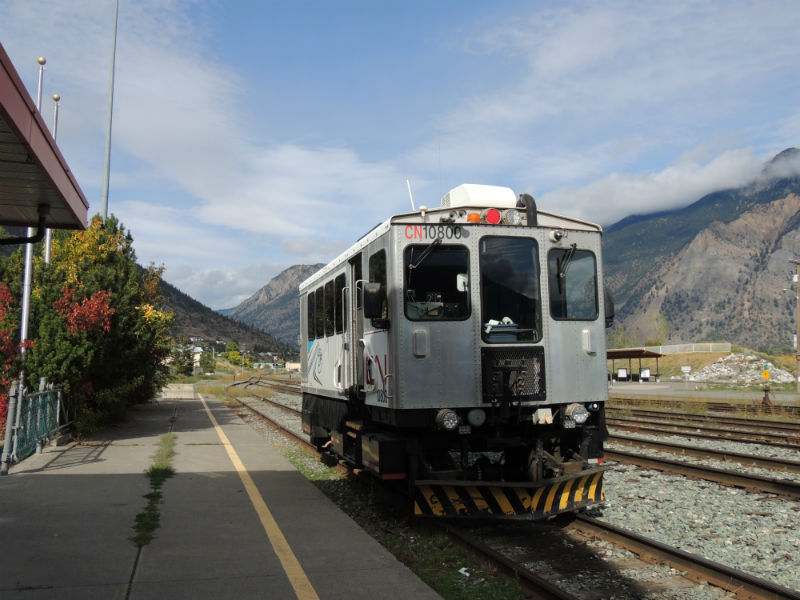 The Kaoham Shuttle is Canada’s most breathtaking hidden Train Journey from Lillooet to Seton Portage, British Columbia The train adventure starts in the small town of Lillooet, a special place surrounded by towering mountains, deep canyons, roaring rivers and crystal clear lakes. This unique piece of heaven situated along the mighty Fraser River captured my heart the first time I […] We use cookies to ensure you receive the best experience on your site. If you continue to use this site we will assume that you are okay with our terms.