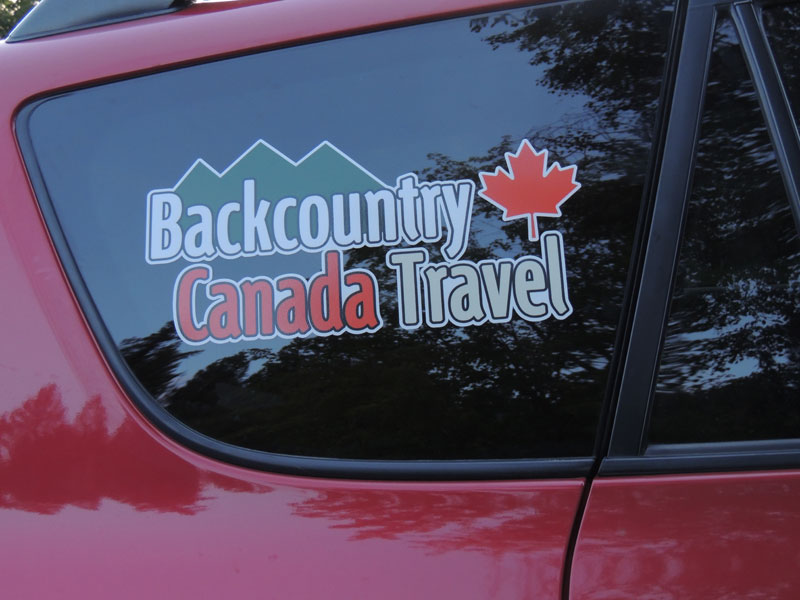 Choosing a vehicle for road tripping is not the same experience for everyone. What kind of vehicle to buy depends on your expectations, on your way of travel, on your comfort level and on your bank account. With the huge selection of vehicles available the options are endless.

Why a Toyota RAV4 again?

I’m looking for a vehicle for long-term travel to replace my old Toyota RAV4; one I can sleep in and live in.  If you’re a short-term visitor to Canada you may be best off rent a car instead of buying one.

I am a Toyota fan. My old 2001 RAV4 took me up to the Canadian Arctic with zero problems on the way and had over 300,000 km on the tachometer when I arrived back in the Okanagan. It was a rough ride and would be hard on any vehicle. I drove approximately 8,000 kilometres on this road trip and over 2,000 kilometres were spent manoeuvring on gravel roads.

Before I left the Okanagan I had a general service and checkup done on the car.  I also invested in four new tires, the best I could find and it was worth the expense.

I got to appreciate my old reliable Toyota RAV4 during that trip. There were times when I was cramped up in the back of the car, listening to the wolves crawl while trying to sleep.  Still, I felt safer curled up in my sleeping bag and protected by the car walls than I would have been sleeping in my tent.

Unfortunately, just as I expected, the northern road trip took a toll on my old Toyota RAV4. Back in the Okanagan I soon knew that it would be best to invest in a newer vehicle, as I  already had my next big road trip planned. So the search began…

I hate shopping for new cars. It’s both time-consuming and frustrating. I would have rather bought a new horse than a new car; shopping for a car is just not my thing. and so my struggle began.

I arrived at a stage where I got sick of looking at websites about road tripping rigs and scrolling through pages of ads and write-ups telling me which vehicle was the best. What I was looking for in my new used car

The vehicles I researched

The good thing was that I had a fair idea of what I was looking for and what options there were available in Canada. I only concentrated on a couple of brands.  I mostly used two websites to do the search:

A big rig was out of the question and I soon got hooked on the new 4×4 Mercedes-Benz Sprinter van, the small version with a 140” wheelbase. As an adventure enthusiast with a passion for off-road places, a Mercedes Sprinter 4×4 conversion would be the most perfect van for life on the road. Unfortunately, I soon learned that the 4×4 Sprinter was not available in Canada yet.  All of the exciting videos I watched were produced by our US neighbours.

The first Mercedes Sprinters 4×4 were on the market in 2015 with a 4 cylinder engine and I was hoping to find a used one in Canada. Unfortunately, I was out of luck. Finally, I gave up on this idea and started to look further.

While I did the Mercedes Sprinter research I found the new VW California van as an option, but it was another slap in my face… VW California vans are not available in North America and can’t be imported. There go all the German brands.

While I slowly pushed the 4×4 campervan idea out of my mind I started looking at SUVs again. Because of my loyalty to Toyota, I stumbled upon the Toyota Highlander and got interested. I liked its shape and the cargo space as well as the powerful V6 engine which would let me pull a trailer if I wanted to.

I couldn’t find a used Highlander in my price range with less than 200,000 kilometres. However, I did come across many excellent reviews regarding this SUV. I even found a 2007 Highlander with just over 140,000 km but learned, that the 2007 Highlanders and earlier productions come with a timing belt and not a timing chain. Timing belts have to be replaced periodically and can damage the engine if not done so. I wasn’t interested in an SUV with a timing belt.

Slowly but surely the Toyota Highlander option also faded away. What about a medium size 4×4 pickup truck, the ultimate vehicle for offroading in Canada?

A pickup truck can easily be converted into a camper with an add-on camping unit on the vehicle’s chassis. Another option is a popup camper which can be collapsed when driving.  For summer road tripping a truck-tent may be all you need for your adventure.

I have never been a pickup truck fan and always left the trucks for the big boys. Still, I spent some time checking whether the medium-sized Toyota Tacoma may be an option for me. As a minimalist, all I would need would be a canopy on the back to make it into my living quarters. The Tacoma would be an excellent vehicle for off-roading and to get to those special places off the beaten track.  But, used Tacoma trucks are not cheap and they are not that great on fuel consumption.

By now, I started to get pretty frustrated and went back looking at the Toyota RAV4s again, thinking that it still could be my best bet. At the beginning of my car search, my dog Trooper was supposed to join me on my travels, and space would have been an issue. Now, since Trooper will not be coming along for the adventure, the idea to buy another Toyota emerged again.

The RAV4 was blue on the online ad but ended up being red when I got to look at it. Red stands for Canada and my branding for “Backcountry Canada Travel”, so I didn’t mind the colour change. How well does dust and mud show on red? We will find out soon enough.

Benefits of buying a Toyota RAV4

The Toyota RAV4 is a crossover SUV which means that it is smaller than a full-sized SUV but bigger than most cars.

If you’re looking for a reliable vehicle for road tripping, find out what I like about it. In a few days, I’ll be heading out on my first road trip with my new RAV4. It will be a trial run before I start to convert the RAV4 into a mini camper.

What vehicle are you using for road tripping in Canada? Please tell us in the comments below.