Canadian Outhouse Or The Privy 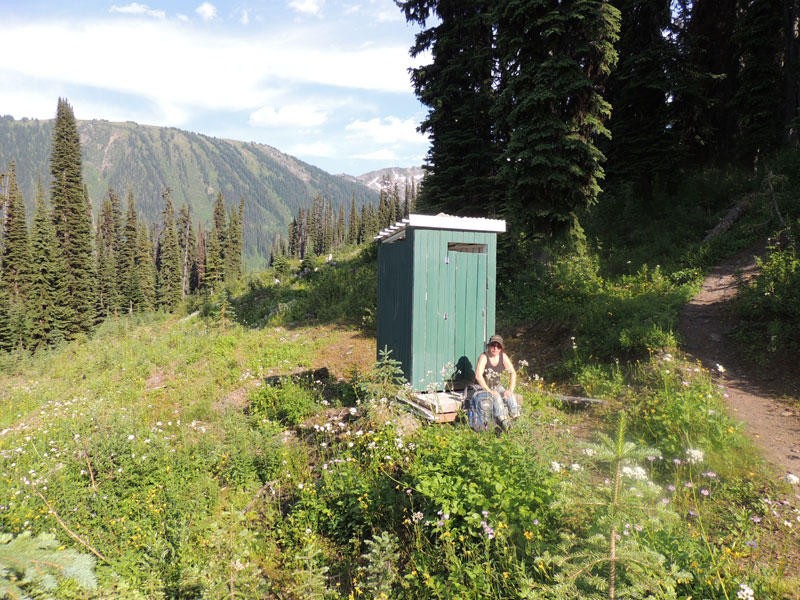 Don’t be shocked if you ask for a toilet when you’re out in the country in Canada and you get directed to an outhouse.

Unless you are a seasoned traveller, the mention of an outhouse can be enough to turn your stomach. However, in many places in Canada, the outhouse is still the only sanitary pit in the woods. You better get used to it.

I have been an outhouse owner for a long time and I do know what I’m talking about. The first one I owned was built from scratch, digging the hole with a shovel and building the structure. It was fancy and looked good as part of a tipi camp. Somehow it was never used much at the time and I wonder what happened to it. I have no clue why I didn’t take a picture.

The outhouse I own now is old. My house was built in 1930 as a one-story cabin. I don’t think that there was a septic system here at that time. The outhouse is located next to the old trapper cabin, a bit of a distance from my house. When I renovated the cabin and had water supply and shower added, I decided not to install a flush toilet and keep the outhouse in operation.

Back To The Basics

The renovated rustic trapper cabin was rented out to holiday guests for the last few summers and the privy came with the rental deal. I’m pretty sure that people from all over the world remember the Silver Spur Trail outhouse experience.

In the pristine Canadian wilderness, you will come across outhouses. As soon as you get off the beaten track and venture into the backcountry you will stumble upon them.

If you get the opportunity to use a privy in Canada, try to enjoy the experience. Think about the pioneers, our land, and the environment. 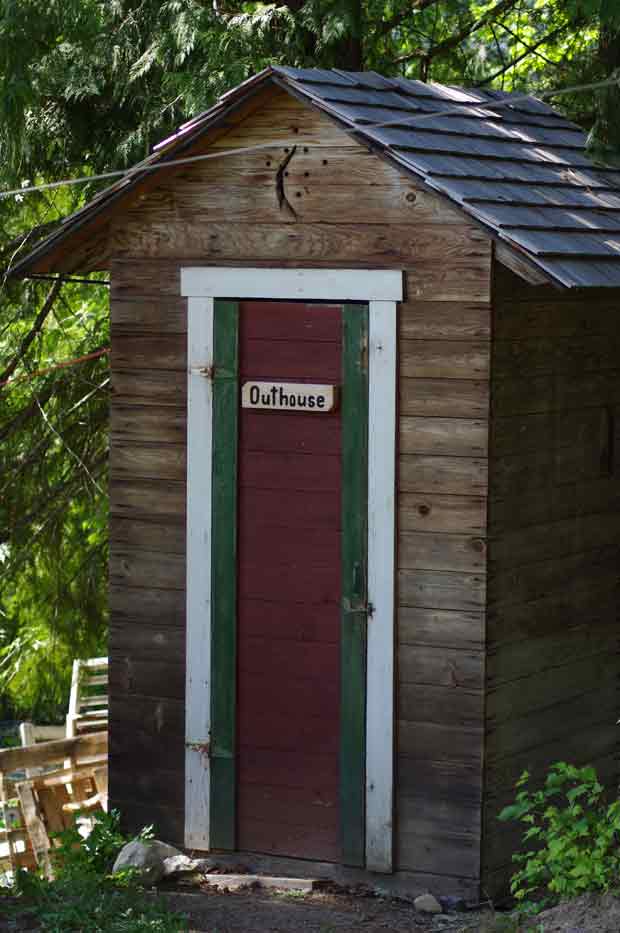 Moon and Stars, what’s the meaning of it

I never used to think much about it when I looked at the cut-out moon and stars at my outhouse. Moon and stars are commonly found on outhouse doors. It kind of gives it a romantic feel, sitting on the privy at night with a dim flashlight, getting a glimpse of the starry night while doing your business.

Doing some research, I learned that the cut out shapes date back to colonial times and serve two purposes. One is just like I guessed, to get in some light. The other one is to differentiate between male and female. The moon symbolizes the female and the star the male. Outhouses like mine with a moon and stars cut-out must have been built for both genders. 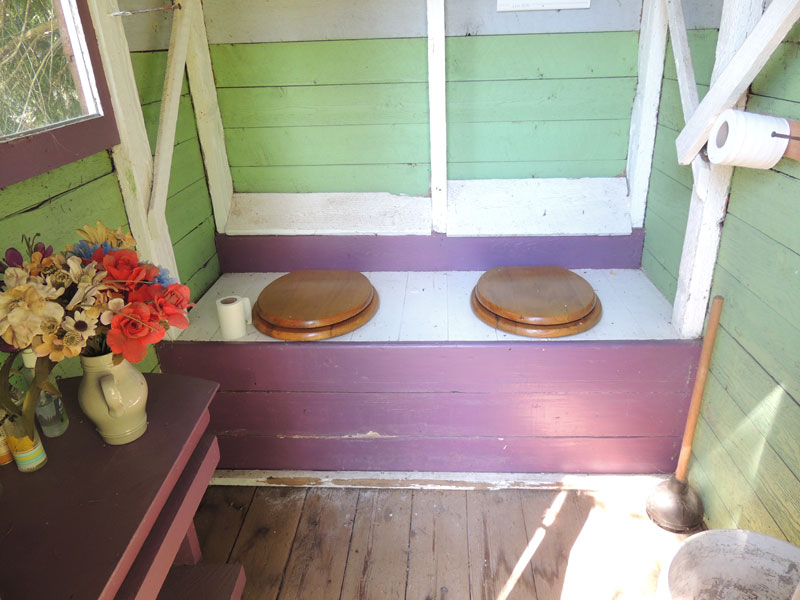 If you come across traditional outhouses with two seats you probably wonder what the heck this is all about.  Two seaters used to be very common and are made for two different-sized behinds. The bigger one is for adults, the smaller one for kids.

I had a different theory about this. Living in bear country and most outhouses being without power it seems a good idea to take somebody along at night when you have to head out into the dark. It will be less scary and you can share the experience.

I’m lucky to own a two-seater. After a new coat of paint, a new cedar shingles roof and two fancy toilet lids the privy was back in operation. A couple of buckets of cedar shaving down the hole and the last stink was gone.

You might be puzzled when you see a pile of old newspapers or an old Sears catalogue in one of the smelly outhouses you come across. Reading material?

I don’t think so. It’s more like a tribute to the toilet paper of the past. Although the first toilet paper was already available in 1857, toilet paper was a luxury in the early days. Newspaper and old Sears catalogues were used in the outhouses to wipe with. I guess it was a way of recycling!

How to empty the sanitary pit

Lucky me I never had to dig out the outhouse pit in the eight years I lived on the ranch.

My privy is cleverly built on a slope with boards in the back which could be opened up to dig out the dirt. We had kids camps here every spring and the outdoor toilet was used by large numbers. Despite that, there is lots of space left and I don’t have to worry about having to dig anytime soon.

One Poop – One Scoop

Having a cedar sawmill in town helps keep up with the needed supply. Additionally, I hang a bunch of fresh mint on a hook during summer. Cedar and mint keep the stink away.

The human waste is turning into fertilizer and is ready if ever somebody decides to get it out of there.

In some situations, it may be better to move the privy to a new location instead of cleaning out the dirt. If you have enough land, relocating could be the way to go. It will depend whether the privy was constructed in a way to make the move possible. If not, it could easily turn into a much more involved project.

If the outhouse has been there since the Pioneer’s time, you may be better off leaving it as an outdoor museum piece and build a new one, that can be moved easily if needed. 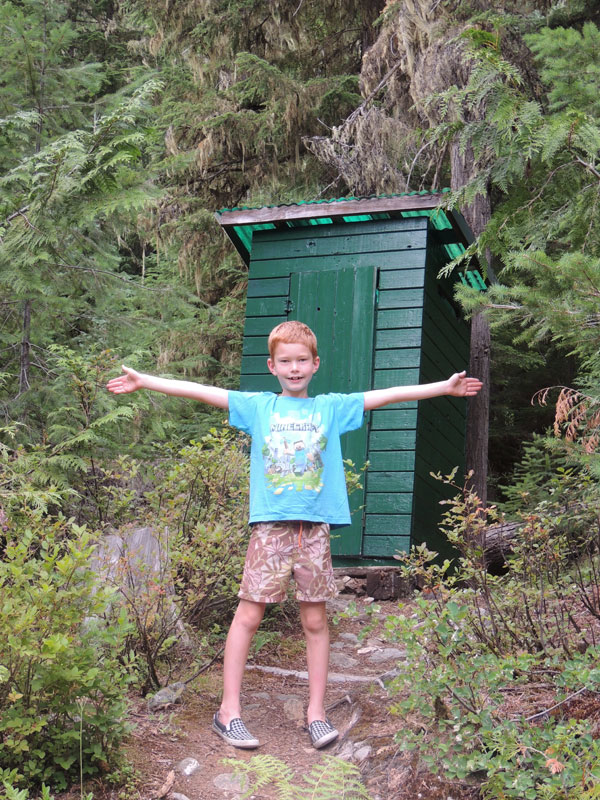 You can’t expect to find luxury outhouses like mine at wilderness campgrounds. Whatever conditions they are in, to find a privy at trailheads and campsites out in the wilderness always amazes me. Toilet paper might be missing, no lid for the hole, and maybe the lock is not working, but who would complain about that. Flies might attack your behind when you sit down, so maybe just keep some bug spray handy.

If the situation is really bad, leave the door open, take a deep breath and do it fast. Don’t play with the idea of going behind a tree instead. It’s better for the environment to use the wilderness toilet.

People actually steal outhouses and it happens periodically. The small town of Lumby was in the News a couple of years ago, when an outhouse was stolen from a local sawmill, valued at $1,900. It was later located on a private property, with some other stolen items. A guy was arrested and it led to a jail sentence.

A Day at the Races

A race with decorated outhouses on wheels, this definitely sounds absurd if you’re not from North America. It has become a popular sport in small towns around the country.

One of the bigger races is the yearly event at Dawson City in the Yukon. It’s a team event and apparently involves physical challenges. The Klondike race has been a Dawson tradition since the 1970’s and is happening in August. Going up to the Yukon this summer it would be nice to see it in real time, but I won’t schedule my travelling around this event. 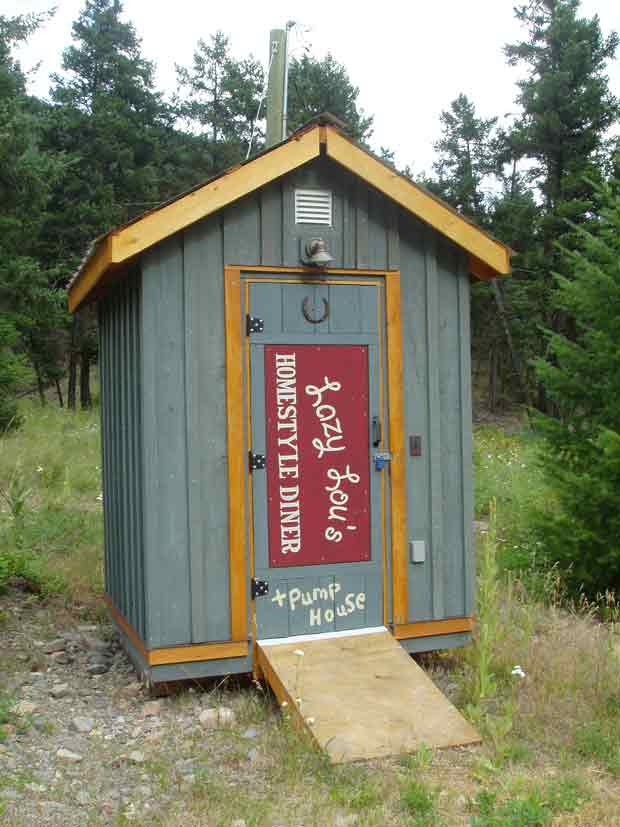 A toilet museum? It is about times past when most folks did their business out back. The tiny Museum of the Outhouse is located inside Nov Scotia’s Cultural Centre in Liverpool. It is only one room filled with collectables, photos and artefacts and an actual outhouse.

You can get yourself a privy keychain or a poster for a great souvenir. Don’t miss it when you travel out East. 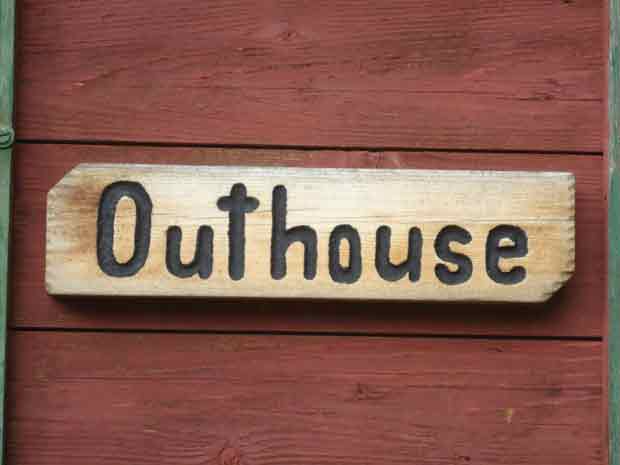 Do you have any outhouse stories to tell? What do you think about using outhouses in Canada? Leave a comment below!